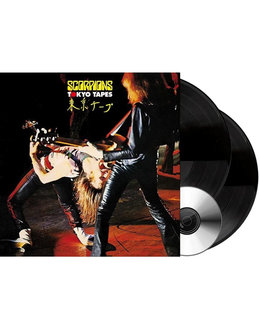 2018 EU reissue on 180g vinyl 2LP + bonus CD =This album iis digitally remastered in a high-quality digipak with the complete track list of the original vinyl release of 1978. An extensive 16 page booklet rounds the package off. It features liner notes written by Edgar Klüsener, a former editor of Germany's Metal Hammer and rare photos. 'Tokyo Tapes' demonstrates everything the Scorpions have always stood for, regardless of their line-up: high energy performances, brilliant musicianship, and intense communication and interaction with their audiences.

The album captures their energy and the fun they have on stage perfectly. It is simply one of the best live albums ever recorded. For those unfamiliar with the early years of the Scorpions, 'Tokyo Tapes' also offers a fantastic opportunity to discover the great music they have written and performed long before they had become global superstars.

Tracks:
LP1:
A1 All Night Long
A2 Pictured Life
A3 Backstage Queen
A4 Polar Nights
A5 In Trance
B1 We'll Burn The Sky
B2 Suspender Love
B3 In Search Of The Peace Of Mind
B4 Fly To The Rainbow
LP2:
C1 He's A Woman, She's A Man
C2 Speedy's Coming
C3 Top Of The Bill
C4 Hound Dog
C5 Long Tall Sally
D1 Steamrock Fever
D2 Dark Lady
D3 Robot Man