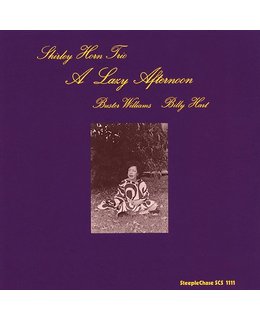 2005 EU reissue on 180g LP - A Lazy Afternoon is a fine studio set with bassist Buster Williams and drummer Billy Hart. An always effective vocalist who provided her own top-notch accompaniment on piano, Horn's almost conversational style of singing works very well whether she is swinging an oldie like "I'm Old Fashioned" or delivering a lush, infectious interpretation of a ballad like "A Lazy Afternoon." In addition to well-known material, she uncovers lost gems like Gordon Jenkins' "New York's My Home" (delivered in a narrative-like style that has a funky flavor) and Peggy Lee's neglected swinging song "Take a Little Time to Smile." The one instrumental is an extended workout of Antonio Carlos Jobim's "Gentle Rain." If there's a weak track on the date, it is Bill Withers' "Gra'ma's Hands," as even her best effort at casting it in a slow blues-gospel arrangement doesn't overcome the repetitious nature of the composition, a frequent problem with adapting Withers' work into a jazz setting.

Lazy Afternoon is a perfect song for her sensual dreamy and quietly dramatic Apparently this very album was the first after 10 years of norecording AND in fact her recording debut as a selfaccompanying singer as we know her all now.
It displayed her mature style and versatility she swings soars and entrances On the strength of this album Shirley Horn began to receive invitations to tour which resulted in the succesful career

Dinah Washington What A Difference A Day Makes =180g=