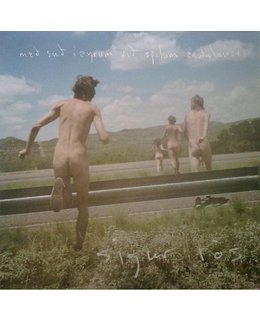 (2008)-2013 US re-pressed on HQ vnyl 2XLP-Inspired by the unfettered feeling of the acoustic performances filmed during 'Heima', the album glows with the 'perfect imperfection' of live takes, the sounds of fingers playing guit...

2013 US re-pressed on HQ vnyl 2XLP-Inspired by the unfettered feeling of the acoustic performances filmed during 'Heima', the album glows with the 'perfect imperfection' of live takes, the sounds of fingers playing guitar strings, cracked notes and a stark, upfront presence not found in previous Sigur Rós recordings
Mastered at Sterling Sound.

With their fifth full-length album, Med Sud I Eyrum Vid Spilum Endalaust (translated as With a Buzz in Our Ears We Play Endlessly), Sigur Rós have taken the poppy, sunshiny leanings of their previous album a step further into the light. The band has always been known for otherworldly soundscapes, and while there is enough of that here to keep the faithful happy, the band also writes straightforward, three-minute pop songs like the incredible catchy, sticky-sweet duo ("Gobbldigook," "Inní Mér Syngur Vitleysingur") that kick the album off like the first rays of the morning sun blazing through your bedroom window. That feeling continues on through the album as both the joyously soaring vocals and the buoyant melodies keep things floating happily on air. The arrangement of sound is quite different from previous albums, too. In the past their sound was characterized by a great wash of instruments merging together into great, gently heaving walls and waves of sound; on this album, for the most part, you can pick out individual instruments whether it's the acoustic guitar that underpins many of the songs (and provides the main backing on the intimate and quite lovely, and quite un-Sigur Rós-like, "Illgresi") or the lone piano that begins "Ára Bátur" (which does expand out into an epic undertaking with over 90 people including the London Sinfonietta and London Oratory Boy's Choir eventually playing on the track). Despite the few tracks that reach for the heavens, for the first time the band sounds grounded and stripped down. Songs like "Festival," with its pounding bassline and charging drums, and the melancholy album closer, "All Alright," which is based on a lonely piano figure (and features lyrics sung in English for the first time in the group's history), are firmly tethered to earth and shorn of excess artifice. In the past it was easy to be impressed with the sound of Sigur Rós, to be carried away by the grandeur of the band and be hit hard by the titanic emotions. On Med Sud I Eyrum Vid Spilum Endalaust you can really hear the human hearts behind the wall of sound, and while the emotional impact is on a smaller scale, somehow it is even more affecting.

Coldplay Viva La Vida or Death and All His Friends