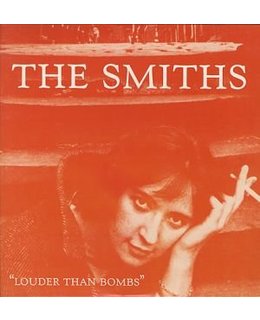 2011 EU repressed on 180g 2xLP=Originally released as a U.S.-only compilation in 1987, the expansive 24-track Louder Than Bombs collects The Smiths' stray early singles, B-sides, John Peel sessions and cuts from the 1984 U.K.-only compilation Hatful of Hollow. Featuring a wealth of material like the non-album singles "Sheila Take a Bow," "Shoplifters of the World Unite," "Panic," "Shakespeare's Sister" and "Ask" as well as B-sides that are virtually unavailable elsewhere in "Half a Person," "Stretch Out and Wait," Unloveable" and Asleep,"Louder Than Bombs is an essential and revelatory Smiths document now reissued on double 180g audiophile vinyl!

A compilation of singles, B-sides, album tracks, and BBC sessions assembled for the American market, Louder Than Bombs is an overlong and unfocused collection that nevertheless boasts a wealth of brilliant material.

Since Hatful of Hollow and World Won't Listen wasn't released on United States, they decided to put (almoust) all the material on this two records in a double lp. Only Hand in Glove is avaiable on a proper album, what make this the most complete compilation you will probably want. ble (B-Side)

Since Hatful of Hollow was unavailable in the U.S. at the time of the release of Louder Than Bombs, this compilation contains large chunks of that album, as well as several cuts from The Smiths, which makes the record a little redundant for most Smiths fans. Also, Louder Than Bombs contains some of the worst material the group ever recorded, including the bland instrumental "Oscillate Wildly" and a cover of Twinkle's "Golden Light." Excluding all of this material, the remainder of the record is brilliant. The singles "Shakespeare's Sister," "Panic," "Ask," "Shoplifters of the World Unite," and "Sheila Take a Bow" are all definitive, as are the elegiac "Unloveable," "Asleep," "Stretch Out and Wait," and "Half a Person," which are all unavailable anywhere else (excluding the British counterpart to Louder Than Bombs, The World Won't Listen). Furthermore, the sneering, bouncing pop of "You Just Haven't Earned It Yet, Baby" and the bizarre travelogue of "Is It Really So Strange?" are two other essential songs not available anywhere else. Though The World Won't Listen is a more concise collection, Louder Than Bombs is a necessary purchase for any Smiths fan.

Smiths, the Hatful of Hollow

Smiths, the Queen is Dead