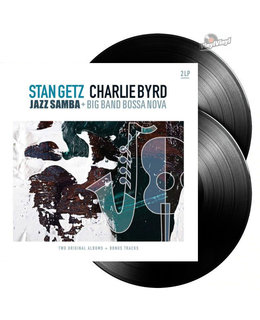 Jazz Samba is the first true bossa nova album by jazz artists, the one that began the wave. The name Stan Getz can easily be tied to bossa nova whenever the music is being discussed in jazz circles but would audiences have ever known of bossa nova if not for Charlie Byrd? The sessions for Jazz Samba were arranged only after Byrd played records he'd gotten in Brazil for Getz. The results: a groundbreaking No. 1 album and a document of jazz history. It's follow-up Big Band Bossa Nova rode that wave, topping out at No. 13 on the Billboard album chart in 1963 in the wake of the success of Jazz Samba (1962) and prior to the release of Getz/Gilberto (1964). Sandwiched as it is between the two landmark albums of the era, it sometimes gets unfairly overlooked.