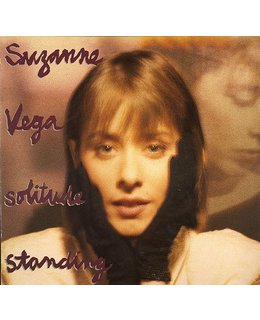 2017 EU reissue on 180g  LP - A brilliant and underrated classic. A record full of remarkable songcraft throughout but particularly on songs like "Luka", "Iron Bound/Fancy Poultry","In The Eye"and "Gypsy", featuring a sublime slice of acoustic charm with melancholic & witty lyrics,

Tracks:
A1 Tom's Diner
A2 Luka
A3 Ironbound / Fancy Poultry
A4 In The Eye
A5 Night Vision

Suzanne Vega emerged in the mid-'80s, and while her intimate voice and acoustic guitar brought to mind Joni Mitchell, her urbane lyrics suggested a sensibility that was as much reportorial as confessional. Vega's second album, which replaced the delicate acoustic textures of her self-titled debut with more dramatic arrangements, includes Vega's career song, "Luka," surely one of the biggest hits ever written about child abuse. But it was the energetic folk-rock production of "Luka," thick with ringing guitars and pushed by perky drums, that let the listener luxuriate in a song that suggested the darkness that can lurk behind a neighbor's door. The title tune confronts personal loneliness with a similarly powerful performance, while "Ironbound/Fancy Poultry" makes a downtown landscape sound downright homey. Well-turned tunes like "Calypso" and "Gypsy" recall the softer textures of her debut. Ironically, Vega's next big hit would come when the English production duo DNA made a dance hit out of "Tom's Diner," a nursery-rhyme tribute to a coffee shop that opens the album. --John Milward