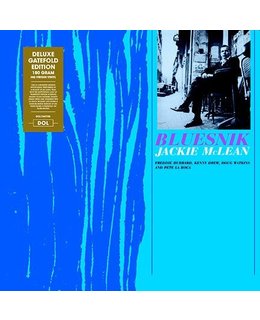 ( 1961 ) 2013 EU reissue on 180g LP = Bluesnik is an album by American saxophonist Jackie McLean recorded in 1961 and released on the Blue Note label. With a lineup of trumpeter Freddie Hubbard, bassist Doug Watkins, pianist Kenny Drew, and drummer Pete L

Tracks:
A1 Bluesnik
A2 Goin' Way Blues
A3 Drew's Blues
B1 Cool Green
B2 Blues Function
B3 Torchin'

But all of that was a prelude to his recording 21 brilliant, explorative and frequently explosive albums for Blue Note during 1959-67. While McLean became one of the first jazz musicians of his generation to stretch beyond hard bop into freer explorations inspired by Ornette Coleman, Swing, Swang, Swingin' is a straight ahead affair in which he mostly puts his stamp on standards. Few versions of "Let's Face The Music And Dance" and "I Love You" have ever had this much intensity and, when McLean digs into the ballad "What's New," he gives it a fiery passion that had never been heard before. Jackie McLean not only swings and swangs but he burns with the urgency, agony and ecstasy of the 1960s.