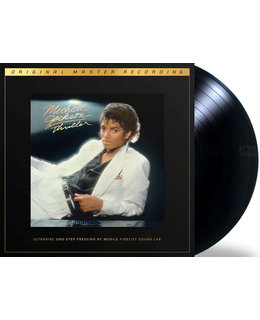 Mastered from the Original Analog Master Tapes for Superior Sound and Limited to 40,000 Numbered Copies

Putting into perspective the incalculable impact and pioneering significance of the best-selling album of all time – Michael Jackson's Thriller – has never been easy. Though Thriller lays claim to mind-boggling statistics that serve as reminders of how pervasive and indispensable it remains to music snobs and casual listeners alike, its essence always traces back to the greatness, power, and scope of the music. Now, as it celebrates its 40th anniversary, the record that reimagined pop; united audiences; made strides towards achieving racial equality; established the video as an artistic and commercial format; and taught the world how to dance sounds even more invigorating than it did during the advent of the Walkman.

Best-selling album of all time. All killer, no filler! What else to say about this seminal Pop record than that you need to have this in your collection? Literally every song on Thriller has turned out to be a hit single. Now completely remastered for superb listening (and dancing, for that matter) experience!

Tracks:
A1. Wanna Be Startin' Somethin'
A2. Baby Be Mine
A3. The Girl Is Mine
A4. Thriller

Thriller is the sound of Michael Jackson in 1982 when he was the coolest slinkiest prettiest pop star alive.  He was Boy George times Rick James and beat both of them at their games although he did nothing but make the competition sound even better. He taught Boy George fans and Rick James fans to hear each others music, just as he taught Van Halen, Lionel Richie, ZZ Top, Stevie Nicks and Bruce Springsteen to play to this grand new pop-thrills audience hed called to the floor. After this nobody claimed disco sucked again. Billie Jean was the hit with MJ's voice aching with erotic longing and dread and nearly five minutes of creepy strings, and seductive bass and breathy gasps, though there wasn't a station on the dial that faded the song out early Beat It was the one designed to get on rock radio, but Billie Jean got there first since the rock stations played it along with the rest of the world. They couldnt resist that bass. Who could?

Mastered from the Original Analog Master Tapes for Superior Sound and Strictly Limited to 40,000 Numbered Copies: Experience the Transformative Songs, Soulful Vocals, Sleek Rhythms, and Vibrant Production as If Hearing It All for the First Time