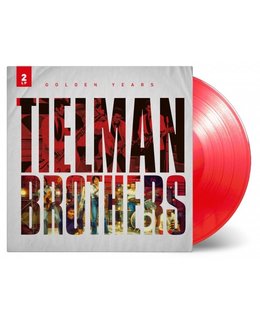 2020 Dutch issue on 180g coloured vinyl 2LP - Golden Years compilation with “Rock Little Baby Of Mine”, “My Maria”, “Tahiti Jungle”, selected B-sides and many more songs from “Indo” rockers. The Tielman Brothers are the founders of the Dutch rock & roll s

The new one-artist compilation series Golden Years brings together the very best of legendary bands and artists. Each 2LP release includes the featured artists A-sides plus some extra gems like promo-only singles or rare B-sides.

The Tielman Brothers are the founders of the Dutch rock & roll scene. Originally from former Dutch colony Indonesia, where they were able to hear the first rock & roll artists on American radio, they moved to The Netherlands in the late 1950's and brought the music with them. The band featured brothers Reggy, Pnthon, Andu and Loulou Tielman. Their sister Jane Tielman would sometimes join them as well. Both their virtuosity and showmanship made them a highly demanded live band, and soon they released their first single “Rock Little Baby Of Mine”. Their amazing live performances didn't go unnoticed in the rest of Europe, and soon they were touring Germany, Belgium and many other countries. All the singles from their heydays are featured on this 2LP set.

Tracks:
LP1:
A1 Rock Little Baby Of Mine
A2 Record Hop
A3 Black Eyes
A4 My Maria
A5 18th Century Rock
A6 I Can't Forget You
A7 Tahiti Jungle
A8 Java Guitars
A9 April In Paris
A10 Love So True
B1 Little Hänschen Twist
B2 Little Girl
B3 Maria
B4 Exodus
B5 Hello Caterina
B6 No One But You
B7 White Christmas
B8 Michelle
B9 Wanderer Ohne Ziel
LP2:
C1 Little Bird
C2 Little Dog
C3 Goodbye Mama
C4 Nina Don't Go
C5 Poor People
C6 Hey Hey (Rock 'N Roll Is In)
C7 Rip It Up
C8 Jesus - Pt. 1
D1 You're Still The One
D2 Swing It Up
D3 Pretend
D4 Don't Go Away
D5 Twisting' The Carioca
D6 You Are The One
D7 She's Gone For Good
D8 I Can't Help Falling in Love

The first Dutch East Indies (Dutch-Indo) band to successfully venture into the international music scene in the 1950s. They were one of the pioneers of rock and roll in The Netherlands, later becoming famous in Europe for playing a kind of rock and roll later called Indorock, a fusion of Indonesian and Western music with roots in Kroncong.

Roy Orbison A love So Beautiful