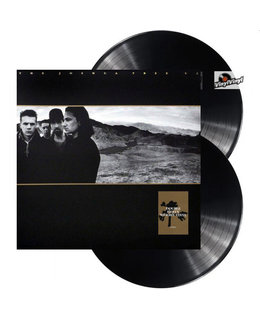 2017 EU 30th anniversary repressed on 180g 2LP=In 1987 this album reached 1 aroundthe world & includes the singles"Where The Streets Have No Name", "I Still Havent Found What Im Looking For" & "With Or Without You." The album's masterstroke,

Having nearly exhausted its capacity for pop-song politics on War and The Unforgettable Fire, U2 turned toward themes of personal identity and complex relationships on The Joshua Tree. Not that the group was willing to come down off the barricades entirely: "Mothers of the Disappeared" and "Bullet the Blue Sky" turn a jaundiced eye toward Central America and the United States' role there. But the predominant mood here is one of self-discovery and the hunger for something more on tracks like the pulsating "Where the Streets Have No Name" and the gospel-tinted "I Still Haven't Found What I'm Looking For." The album's masterstroke, however, is "With or Without You," a divided love song dressed up as an ode of devotion.