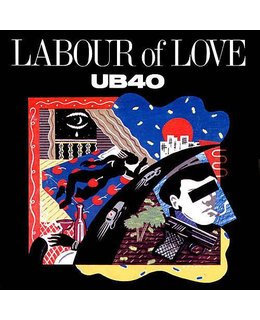 A victim of both overexposure and embracement from privileged hedonists around the globe, UB40's Labour of Love is still a near perfect album, one filled with warmth and an infectious love of the music it's covering. Then there's that reggae version of "Red Red Wine" that spills out of yachts, frat parties, soirees by the pool, water parks, and just about anywhere there are sun-seeking tourists. Delivered with a drunken sway, the band's cover of the Neil Diamond favorite also features a new toasted/rapped break in the middle, which comes courtesy of UB40 MC Astro and adds so much mirth and fun to the number that Diamond lifted it for his own live show. Even if omnipresence has since made it pop-reggae's "Don't Worry Be Happy," the U.K. crew's version is in the Jamaican tradition of covering sweet, soothing tunes that pre-date lovers rock, plus the rest of this all-cover-versions album sticks with the classic reggae songbook, as even the Impressions' "Keep on Moving" is done in a style that honors the 1973 recording from Bob Marley & the Wailers. If "Red Red Wine" is effortless almost to a fault, Jimmy Cliff's "Many Rivers to Cross" is performed with full heart and can rock the soul's foundation, while "Johnny Too Bad" is just spiky enough to bring reminders of the group's birth in the time and land of post-punk. Everything else is A- at worst, and the end-to-end LP flow is classic while recontextualizing "Red Red Wine" for the better. Put it on at a party and spill beer on it if you must, because the resilient Labour of Love is true sweetness and light.