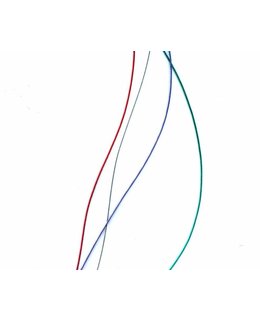 Tonearm Cable MC150M Halogen free. All of our cables are designed for an optimal experience of sound. Our different technologies are focused on designing and producing conductors reproduce musical signals very close to natural and live-sound quality....

Conductivity is based on the assumption that electrons are the moving particles (electrically charged) in a metal conductor. Electrons are the outer particles of an atom and (in metallic conductors) are able to transfer from atom to atom. The higher the number of electrons available to change to the next atom, the lower the resistance of the conductor. So a good conductor (from the conductivity point of view) has plenty of free electrons. In an insulator the situation is just the opposite: None or very few electrons.

The musical journey of electrons

Conductors are a large collection of crystals of all sizes and shapes through which borders electrons pass during their musical journey. These crystal borders, and also the impurities within them, play an essential part in properties like conductivity and strength, (e. g. Iron can be 1000 times stronger without impurities nor crystals). This is the result of tests made in space. Also your copper loudspeaker cable is blessed with many impurities and crystals.

The movement of the electrons, from atom to atom, is not a simple process. The spacing between atoms is relatively huge and, accordingly, the moving electrons have to travel huge distances. Almost like going from one solar system to the next. But in your loudspeaker cable all this distance problem is promptly solved by Mother Nature. Still the question remains: How?

The answer is rather simple: Electrons are, at the same time mass (as a particle) and an energy packet (as a wave). When electrons move around the nucleus of one atom it’s better to think of them as particles and when they travel those big distances between other atoms we just assume they’re energy packets (waves). Remember Star Trek? You travel between two positions in an energy state and not in a material state!

This knowledge is paramount for the design of our conductors. It allows us to focus on their material properties rather than on its scale of purity, even if this should reach nine nines! This different way of thinking progressed to all our cable technologies.

The Linear Structured Carbon ® cable line, the "Fusion Series" and the "Tunnel Technology", just to name three, are based on these assumptions.

Our most advanced technology is 3T: True Transmission Technology. A multi-metal conductor that offers an (extremely) high quality reproduction. It culminates over 25 years of experience in manufacturing audio products and a life of very intense listening (mainly good music).