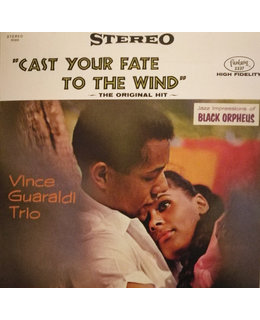 (1962 ) 2014 EU reissue on 180g VINYL LP = Jazz Impressions Of Black Orpheus contains both original composition of songs from the 1959 film Black Orpheus'. It spawned the hit single Cast Your Fate To The Wind', which won the 1963 Grammy Award for Best Ori

Jazz Impressions Of Black Orpheus was recorded in San Francisco in November 1961 & February 1962 with Vince Guaraldi (piano), Monty Budwig (bass) and Colin Bailey (drums). Dean Reilly. Guaraldi began exploring his personal style on the piano with these tracks before truly becoming recognized as a great jazz pianist with Jazz Impressions, his subsequent release.

Tracks:
A1 Samba De Orpheus
A2 Manha De Carnaval
A3 O Nosso Amor
A4 Generique
B1 Cast Your Fate To The Wind
B2 Moon River
B3 Alma-Ville
B4 Since I Fell For You