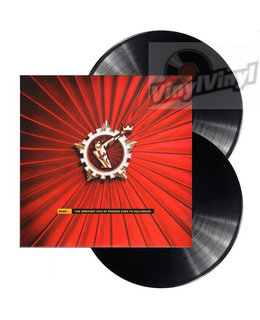 ( 1994) ) - 2020 EU reissued on 180g 2LP-compilation of Frankie's material as could be assembled, featuring songs from Pleasuredome (including, of course, "Relax," "Two Tribes," "The World Is My Oyster," and "Bang") and songs from Liverpool.

2020 EU reissued on 180g vinyl 2LP -Bang!... Greatest Hits of Frankie Goes to Hollywood is as good a compilation of Frankie's material as could be assembled, featuring no less than eight songs from Pleasuredome (including, of course, "Relax," "Two Tribes," "The World Is My Oyster," and "Bang") and five songs from Liverpool. There were a couple of good songs stranded on the second album ("Ferry Cross the Mersey," "Rage Hard") and certain casual fans may enjoy having those singles on the same disc with the hits, but the fact remains that Frankie can only truly be understood (and, to a certain extent, truly enjoyed) on Pleasuredome.

That debut stood on its own, sounding unlike any other record of its time, and it contained all of the big hits in the first place.

Consequently, many casual listeners will be satisfied with simply acquiring that record, even if the album versions were slightly different than the singles. If they feel otherwise, Bang! will serve as the definitive singles collection, satisfying both the hardcore and casual fan.