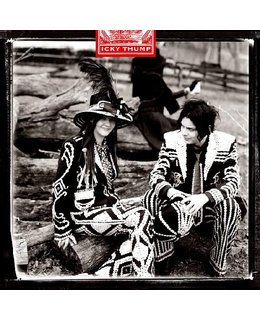 2014 EU repressed on 180g LP- Mastered from the Original Analog Source -The record that kick-started the garage-rock revival, The White Stripes' White Blood Cells serves as the band's commercial breakthrough, going gold and yielding the Top 20 modern rock hits "Fell In Love With A Girl" and "Dead Leaves And The Dirty Ground." While the band retains the characteristic elements of its previous two albums, the duo evolves, turning in more tuneful material pregnant with dynamic hooks, scorching riffs, and more pronounced vocals.

Signs of the co-ed pair's genius abound, whether on the acoustic-flavored ditty "Hotel Yorba" or the inside-out perspective of the moody "The Union Forever." New wrinkles appear in the band's sound, yet urgent vibes and modern updates of traditional blues resonate. Several songs find the White Stripes turning away from fun albeit simplistic punk stomps in favor of more complex, emotional, and involved arrangements steeped in aura and melody. No wonder White Blood Cells is on many best of the decade lists.

As for the sonics, now better than ever, remastered from the original analog source. The White Stripes' use of analog and low-fidelity equipment in the recording process partnered with a DIY approach created a simplicity of composition, arrangement and performance that sets them apart from their contemporaries.

Tracks:
A1 Dead Leaves And The Dirty Ground
A2 Hotel Yorba
A3 I'm Finding It Harder To Be A Gentleman
A4 Fell In Love With A Girl
A5 Expecting
A6 Little Room
A7 The Union Forever
A8 The Same Boy You've Always Known

Despite the seemingly instant attention surrounding them -- glowing write-ups in glossy magazines like Rolling Stone and Mojo, guest lists boasting names like Kate Hudson and Chris Robinson, and appearances on national TV -- the White Stripes have stayed true to the approach that brought them this success in the first place. White Blood Cells, Jack and Meg White's third effort for Sympathy for the Record Industry, wraps their powerful, deceptively simple style around meditations on fame, love, and betrayal.

As produced by Doug Easley, it sounds exactly how an underground sensation's breakthrough album should: bigger and tighter than their earlier material, but not so polished that it will scare away longtime fans. Admittedly, White Blood Cells lacks some of the White Stripes' blues influence and urgency, but it perfects the pop skills the duo honed on De Stijl and expands on them. The country-tinged "Hotel Yorba" and immediate, crazed garage pop of "Fell in Love With a Girl" define the album's immediacy, along with the folky, McCartney-esque "We're Going to Be Friends," a charming, school-days love song that's among Jack White's finest work.

However, White's growth as a songwriter shines through on virtually every track, from the cocky opener "Dead Leaves and the Dirty Ground" to vicious indictments like "The Union Forever" and "I Think I Smell a Rat." "Same Boy You've Always Known" and "Offend in Every Way" are two more quintessential tracks, offering up more of the group's stomping riffs and rhythms and us-against-the-world attitude. Few garage rock groups would name one of their most driving numbers "I'm Finding It Harder to Be a Gentleman," and fewer still would pen lyrics like "I'm so tired of acting tough/I'm gonna do what I please/Let's get married," but it's precisely this mix of strength and sweetness, among other contrasts, that makes the White Stripes so intriguing. Likewise, White Blood Cells' ability to surprise old fans and win over new ones makes it the Stripes' finest work to date.
ALLMUSIC OVERVIEW