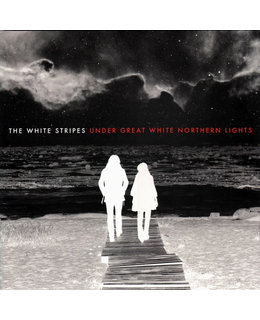 2010 EU issue on 180g vinyl 2LP = A compelling reflection of the bands career,  set features 16 live tracks and serves as the soundtrack to the documentary film of the 2007 Canadian White Stripes Tour.

2010 EU issue on double 180g vinyl 2LP Featuring live recordings from their 'Under Great White Northern Ligh ts' tour,In the summer of 2007, The White Stripes embarked on a cross-country Canadian tour to accomplish their goal of performing in every province and territory, across the expansive northern nation. The live album continues that celebration and is a perfect companion piece to the film, featuring 16 songs recorded at various shows throughout the Canadian tour,  a collection that captures all the aural intensity and spontaneity that The White Stripes have become known for.  A compelling reflection of the bands career,  both the live album and the documentary will allow fans to reminisce about where they were, when they first heard The White Stripes, while also adding extraordinary pieces of work to their already stunning artistic cannon.

White Stripes / Jack White -Get Behind Me Satan =2LP=