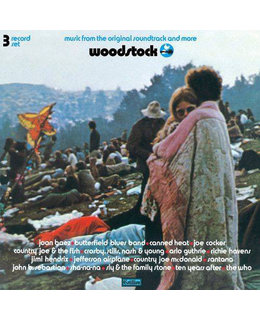 "The recording of the music at Woodstock was a challenge of unprecedented scope and complexity requiring a level of endurance from both man and machine previously unheard of in location recording. The music and sounds in this album were selected from 64 reels of 8 track tape recorded over a period of three and a half days in three continuous 18 hour sessions. Technical flaws, resulting from equipment failure as well as human overload are inevitable in a venture of this size. Just as inevitably, some of them occur in the material included in this album. Consider them like the scars in the fine leather, proof of the origin and authenticity of the material in which they are found." - Eric Blackstead, producer

David Crosby Here If You Listen