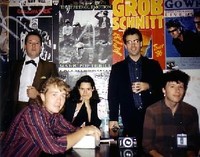 Jangly folk pop band led in the 1980s & early '90s by the dark, distinctive vocals of Natalie Merchant.  10,000 Maniacs is one of rock's most critically acclaimed bands.  The quintet's pop-conscious, literate and lush aesthetic helped reshape FM radio. Along with bands like R.E.M., U2, The Smiths, and The Police, 10,000 Maniacs is considered one of the primary architects of the college rock sound.