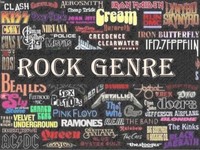 By the late 1960s "classic rock" period, a number of distinct rock music subgenres had emerged, including hybrids like blues rock, folk rock, country rock, southern rock, raga rock, and jazz-rock, many of which contributed to the development of psychedelic rock, which was influenced by the countercultural psychedelic and hippie scene.

New genres that emerged included progressive rock, which extended the artistic elements, glam rock, which highlighted showmanship and visual style, and the diverse and enduring subgenre of heavy metal, which emphasized volume, power, and speed.

In the second half of the 1970s, punk rock reacted by producing stripped-down, energetic social and political critiques. Punk was an influence in the 1980s on new wave, post-punk and eventually alternative rock.

From the 1990s alternative rock began to dominate rock music and break into the mainstream in the form of grunge, Britpop, and indie rock. Further fusion subgenres have since emerged, including pop punk, electronic rock, rap rock, and rap metal, as well as conscious attempts to revisit rock's history, including the garage rock/post-punk and techno-pop revivals at the beginning of the 2000s. The 2010s saw a slow decline in the cultural relevancy of the genre, being usurped by hip-hop as the most popular genre in the United States in 2017.

Rock music has also embodied and served as the vehicle for cultural and social movements, leading to major subcultures including mods and rockers in the UK and the hippie counterculture that spread out from San Francisco in the US in the 1960s. Similarly, 1970s punk culture spawned the goth, punk, and emo subcultures. Inheriting the folk tradition of the protest song, rock music has been associated with political activism as well as changes in social attitudes to race, sex and drug use, and is often seen as an expression of youth revolt against adult consumerism and conformity.

( 1970 ) - 2017 EU reissue Half-Speed master on 180g vinyl LP-  This Live at Leeds is actually superior to its revered predecessor. The Who are at their Maximum R&B peak here, bringing an almost proto-metal aggression to supercharged covers of "Young Man

2017 EU issue special 180g 4LP vinyl package boxset. Hear for yourself the best of these haunting and powerful shows on this exclusive vinyl box set which showcases the entire concert on 4LPs, with 2 gatefold sleeves, poly liner inner s...

ROGER WATERS - Is This The Life You Really Want =2LP=

( 1987 ) - 2017 EU reissue 180g vinyl LP= with four Top 20 singles ("Big Love," "Little Lies," "Seven Wonders" and "Everywhere") and more than 15 million copies sold worldwide. This is an album which combines the progressiveness of Tusk with the emotion

( 1975 ) - 2017 EU reissue oon 180g LP=1975's Young Americans, representing the zenith of Bowie's influential soul periodIt is not often that an album makes such a sweeping musical, cultural and subcultural impact. David Bowie's Young Americans is one of

COUNTING CROWS - -August And Everything After =2LP=

( 1993 ) 2017 EU reissue on 180g 2LP+download-The debut studio album by American rock band, includes the singles 'Mr. Jones', 'A Murder Of One' and 'Round Here'An artfully crafted, intimate song cycle, August and Everything After seemed to explode on im..

1975-2009 EU reissue vinyl LP - A fine album with some nice treats for diehards, featuring the immortal 'Big Balls' The album's greatest artistic moment, however, comes in the form of 'Ride On,' with a slow, rhythmic blues ballad.

FOXYGEN - We Are the 21st Century Ambassadors of Peace & Magic

2013 EU issue on vinyl LP + MP3 download- We Are the 21st Century Ambassadors of Peace & Magic is a precocious and cocksure joyride across California psychedelia with a burning, bursting punk rock engine. In the same year as Scott McKenzie the singer...

( 1979 ) 2017 EU reissue on 180g LP - George Harrison's self-titled album included the hit single 'Blow Away,' 'Not Guilty' a song that Harrison originally recorded in 1968 for the Beatles' White Album. &'Here Comes the Moon' the lyrical successor to h...

2013 EU repressed on 180g 2LP-This 2LP set features a newly remastered version of the original album, and the bonus LP offers 14 tracks from the Sony Music archives, 9 of which are previously unreleased! The art of the concept album, as developed and...

ROLLING STONES, THE - -Let It Bleed

( 1969 ) 2003 EU DSD reissue on vinyl LP - One of the Stones most beloved albums 1969s Let It Bleed was a benchmark for several reasons -With Gimme Shelter and You Can't Always Get What You Want on a plate does it really been al....

EAGLES - On The Border

( 1974 ) - 2014 EU reissue on 180g VINYL= this 1974 album marked a transitional point between their original countryrock soundand the slick poprock they would later embrace, including the smash hit Already Gone and their cover version of the Tom Waits ba

( 1975 ) 2014 EU reissue  180g vinyl LP - the 4th studio album from the esteemed band and the last to feature Bernie Leadon. Includes the classic track " Lyin Eyes " plus "Take It To The Limit" as well as the title track, presented in the original artwrok

2008 EU issue vinyl 3LP=Live in Buenos Aires Formato , Live show from The police Reunion World Tour. Featuring all the hits "Message In A Bottle ", " Every Breath You Take", " Walking On The Moon", " Dont Stand So Close To Me", " Roxanne" and more.

AC/DC - Back In Black