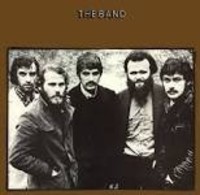 The Band was a Canadian-American rock band that existed under that name from 1968 to 1976 and then modified in composition from 1983 to 1999.

They made the first name in the second half of the sixties as backing Bob Dylan. They were later on their own very influential as interpreters of Americana and made partly to be various forms of traditional American music. Popular again In their country music merged with folk, blues and rock 'n roll.

( 1977 ) 2015 EU reissue 180g vinyl LP- Islands, recognized by the group as more of a rarities collection than a full-fledged studio record, Islands does include a few catalog gems like Levon Helm's excellent take on "Ain't That A Lot of Love...

( 1970 ) - 2015 EU repressed on 180g vinyl LP - An Organic, Iconic Rock Landmark. A sharp stylistic and thematic detour away from its first two albums, the Band’s Stage Fright is a compelling snapshot of a group copi...