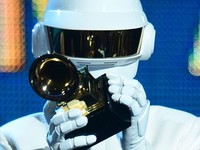 Daft Punk is a French electronic music duo consisting of musicians Guy-Manuel de Homem-Christo and Thomas Bangalter. Daft Punk reached significant popularity in the late 1990s house movement in France and met with continued success in the years following, combining elements of house with synthpop. The duo is credited with producing songs that are considered essential in the French house scene. The group was managed from 1996 to 2008 by Pedro Winter (Busy P), the head of Ed Banger Records.Early in the group's career, the band members were influenced by groups including The Beach Boys and The Rolling Stones.

( 1997 ) - 2022 EU repress on 2LP including the single releases Around The World and Revolution 909 =Daft Punk's full-length debut is a funk-house hailstorm, giving real form to a style of straight-ahead dance music not attempted since the early fusion d

(2010) 2022 EU reissue 2LP=Tron: Legacy (Original Motion Picture Soundtrack) is the soundtrack album to the 2010 film of the same name, released on December 3, 2010. It is the only film score by French music duo Daft Punk.

The score of Tron: Legacy fe