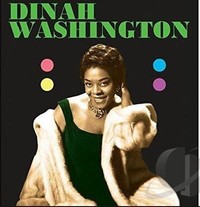 Dinah Washington: (born Ruth Lee Jones 1924 –1963) An American singer and pianist, who has been cited as "the most popular black female recording artist of the '50s". Primarily a jazz vocalist, she performed and recorded in a wide variety of styles including blues, R&B, and traditional pop music,[1] and gave herself the title of "Queen of the Blues". She was a 1986 inductee of the Alabama Jazz Hall of Fame,and was inducted into the Rock and Roll Hall of Fame in 1993.

(1956) -2018 EU reissue on 180g vinyl LP= One certainly couldn't say that Ruth Jones had a velvety, smoochy voice. But in jazz history that's never been of prime importance.