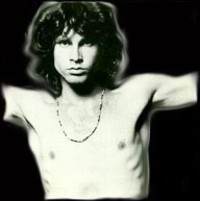 The Doors were an American rock band formed in 1965 in Los Angeles, California, with vocalist Jim Morrison, keyboardist Ray Manzarek, drummer John Densmore and guitarist Robby Krieger. They were among the most controversial, influential and unique rock acts of the 1960s and beyond, mostly because of Morrison's wild, poetic lyrics and charismatic but unpredictable stage persona. After Morrison's death in 1971, the remaining members continued as a trio until finally disbanding in 1973.

Three of the band's studio albums, The Doors (1967), L.A. Woman (1971), and Strange Days (1967), were featured in the Rolling Stone list of The 500 Greatest Albums of All Time, at positions 42, 362 and 407 respectively.The band, their work, and Morrison's celebrity continue to be considered inexorably embedded within the larger counterculture of the 1960s. In 1993, the Doors were inducted into the Rock and Roll Hall of Fame.

( 1967 ) 2010 Rhino Stereo remaster 180g LP- yielded the touchstone hits "Love Me Two Times" and "People Are Strange" as well as the fan favorites "Moonlight Drive," "Strange Days" and "When The Music's Over."

1968 - 2007 German repressed on 180g HQ vinyl =,includes the classics 'Hello I Love You' and 'The Unknown Soldier''. With their third album, 1968's Waiting For The Sun, The Doors managed to take a mellower turn, delivering some fine melodic ballad rock s

DOORS, THE - Weird Scenes Inside The Gold Mine = 2LP =

( 1970 ) 2009 EU stereo remaster LP on 180gram virgin vinyl- The album shot up to #4 on the charts on the strength of the standards "Waiting For The Sun," "Roadhouse Blues" "Peace Frog" and "Ship Of Fools." featuring the Original Stereo Mixes includes th