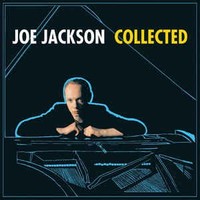 Joe Jackson:( 1954 -  ) An English musician and singer-songwriter. After years of studying music and playing clubs, Jackson's first release, "Is She Really Going Out with Him?" became a hit in 1979. This was followed by a number of new wave singles before he moved to more jazz-inflected pop music and had a Top 10 hit in 1982 with "Steppin' Out". He has also composed classical music. He has recorded 19 studio albums and received 5 Grammy Award nominations.

2015 EU issue on 180g vinyl 2LP=Fast Forward is the 19th studio album by British singer-songwriter Joe Jackson. The album and tracklist were officially announced via Jackson's official website and was scheduled for a mid-fall release.