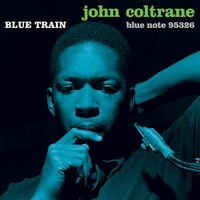 John Coltrane, also known as "Trane" (1926 –1967), American jazz saxophonist and composer. Working in the bebop and hard bop idioms early in his career, Coltrane helped pioneer the use of modes in jazz and was later at the forefront of free jazz. He led at least fifty recording sessions during his career, and appeared as a sideman on many albums by other musicians, including trumpeter Miles Davis and pianist Thelonious Monk.
Coltrane influenced innumerable musicians, and remains one of the most significant saxophonists in music history. He received many posthumous awards and recognitions, including a special Pulitzer Prize in 2007. His second wife was pianist Alice Coltrane and their son Ravi Coltrane is also a saxophonist.
Albums:
1957 - John Coltrane with Kenny Burrell
1957 - Coltrane (Original Jazz)
1957 - Lush Life
1957 - John Coltrane with the Red Garland Trio
1957 - Traneing In
1957 - Blue Train
1958 - Soultrane
1958 - Trane's Reign
1959 - Giant Steps
1960 - The Avant-Garde
1960 - Coltrane Plays the Blues
1960 - My Favorite Things
1960 - Coltrane Jazz
1961 - Africa/Brass
1961 - Olé Coltrane
1961 - Impressions
1961 - Live at the Village Vanguard
1962 - Coltrane
1962 - Ballads
1963 - John Coltrane and Johnny Hartman
1963 - Live at the Half Note
1964 - Crescent
1964 - A Love Supreme
1967 - Stellar Regions

( 1963 ) - 2015 EU reissue on 180g LP=John Coltrane's matchup with singer Johnny Hartman, although quite unexpected, works extremely well. Hartman was in prime form on the six ballads, and his versions of "Lush Life" and "My One and Only Love"...

( 1963 ) - 2013 EU reissue on 180g LP= The last word in John Coltrane’s ballad playing and became an instant hit. One of the most revolutionary saxophonists in jazz history, Coltrane was also a superb ballad player, capable of creating a very personal an

(1961) - 2019 EU reissue 180g vinyl LP-Instantly recognized and forever celebrated, My Favorite Things is a landmark recording in every possible sense. The 1961 album is the first that introduced John Coltrane's legendary quartet with pianist McCoy Tyner,

(1 957 ) - 2010 EU re-issue on 180g vinyl LP+bonus track- A classic, an album often heralded as one of the greatest records of the 1950s by fans and jazz educators alike.  It gives the listener a very clear view of what made these musicians so great. You

( 1957 ) - 2019 EU re-issue on 180g purple vinyl LP- One of the best recordings of the great Jazz master, features an all-star lineup of talent, including Red Garland on piano, Paul Chambers on bass, Donald Byrd on trumpet, and Art Taylor on drums. A cri

JOHN COLTRANE - Both Directions at Once: The Lost Album

2018 EU issue on 180g LP --This previously unreleased 1963 session documents the saxophonist’s Classic Quartet during a pivotal phase: John Coltrane’s New ‘Lost Album’ Captures a Day in the Life of His Greatest Band.

2010 EU issue repressiong on 180 grams audiophile vinyl =For 1958's Soultrane John Coltrane is again joined by the Red Garland Trio in a quartet setting, which was the case with its predecessor released earlier the same year. The 5-song standard heavy set

(1960) - 2012 EU reissue on 180g LP-In 1960, the hugely innovative Coltrane was taking some giant steps of his own - this was the first recording of an entirely Trane-penned set and it achieved the stunning emotional intensity for which his live work was