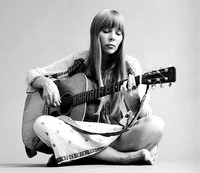 Joni Mitchell is a Canadian musician, singer songwriter, and painter. Allmusic said, "When the dust settles, Joni Mitchell may stand as the most important and influential female recording artist of the late 20th century",[7] and Rolling Stone called her "one of the greatest songwriters ever".[8] Her lyrics are noted for their developed poetics, addressing social and environmental ideals alongside personal feelings of romantic longing, confusion, disillusion, and joy.

2020 EU pressed on standard  vinyl 2LP -Something sweet was going on between James Taylor and Joni Mitchell when they played together at London's Paris Theatre in 1970. You can hear it in the recordings, taped by the BBC and broadcast as one of John Peel'