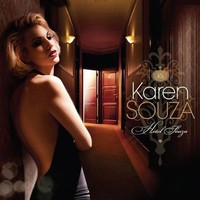 Karen Souza (born January 10, 1984) is an Argentinian jazz and bossa nova singer, songwriter, and producer.
Souza began her career by providing vocals for producers of electronic music. Under pseudonyms she sang versions of hits songs from the 70s, 80s, and 90s, such as "Creep" by Radiohead and "Do You Really Want to Hurt Me" by Culture Club.Her version of "Creep" was used in the film The Zero Theorem (2013). In 2010, she performed at Blue Note Tokyo and signed a contract with JVC Victor in Japan. She has toured in Venezuela, Brazil, Mexico, China, Korea, Spain, and Italy.

2019 EU issue on coloured vinyl LP-Three years after the release of her successful Essentials II, Jazz diva Karen Souza is back with her fourth studio album. Velvet Vault is the title of a collection that combine jazz standards with jazz reworks of pop cl

( 2012 ) 2019 EU reissue on coloured vinyl LP-Karen Souza, who brought the commercially successful series Bossa & Stones and Jazz & 80's to life, is now presenting a new album, Hotel Souza, which features previously unreleased songs for her own, making he

( 2017 ) 2019 EU reissue 180g coloured vinyl LP-Essentials II’ sums up Karen Souza’s career as a Jazz singer. Enjoy fantastic recreations of Pop classics , It is clear that Karen Souza is poised to be recognized as the great new voice of Jazz today. Follo