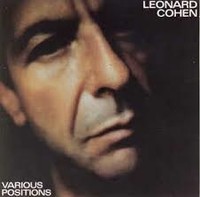 Leonard Cohen(September 21, 1934 – November 7, 2016) was a Canadian singer, songwriter, poet, and novelist. His work explored religion, politics, isolation, depression, sexuality, loss, death and romantic relationships. In 2011, Cohen received one of the Prince of Asturias Awards for literature and the ninth Glenn Gould Prize.

Cohen pursued a career as a poet and novelist during the 1950s and early 1960s; he did not launch a music career until 1967, at the age of 33. His first album, Songs of Leonard Cohen (1967), was followed by three more albums of folk music: Songs from a Room (1969), Songs of Love and Hate (1971) and New Skin for the Old Ceremony (1974). His 1977 record Death of a Ladies' Man, co-written and produced by Phil Spector, was a move away from Cohen's previous minimalist sound. In 1979, Cohen returned with the more traditional Recent Songs, which blended his acoustic style with jazz, Oriental, and Mediterranean influences. Perhaps Cohen's most famous song, "Hallelujah", was first released on his studio album Various Positions in 1984. I'm Your Man in 1988 marked Cohen's turn to synthesized productions. In 1992, Cohen released its follow-up, The Future, which had dark lyrics and references to political and social unrest.

Cohen returned to music in 2001 with the release of Ten New Songs, which was a major hit in Canada and Europe. His 11th album, Dear Heather, followed in 2004. Following a successful string of tours between 2008 and 2013, Cohen released three albums in the last five years of his life: Old Ideas (2012), Popular Problems (2014) and You Want It Darker (2016), the last of which was released three weeks before his death. A posthumous album titled Thanks for the Dance was released in November 2019, his fifteenth studio album.

2019 EU issue on 180g vinyl LP =Final Leonard Cohen Studio Album Completed by His Son to Fulfill His Father's Wishes: Thanks for the Dance Vinyl LP Features Members of The National and Arcade Fire

( 1975 ) 2017 reissue on 180g LP - 1975's compilation is the ideal introduction to Cohen. includes such masterpieces as "Suzanne," "So Long, Marianne" and "Bird on the Wire," as well as later efforts including "Chelsea Hotel" and "Famous Blue Raincoat."

(1967 ) 2016 EU repressed 180g vinyl LP = his 1967 debut includig his mostloved songs such as 'Suzanne', 'Sisters Of Mercy' and 'So Long Marianne'. It is filled with songs about the dynamics between men & women but not necessarily about love They deal mo

2014 EU issue on 180g vinyl LP + bonus CD -Popular Problems is Leonard Cohen's thrilling new studio album, where he takes us down into the avenues of our dreams and sets a new tone and speed of hope and despair, grief and joy. Cohen here is an aston...

( 1985 ) 2010 EU reissue on 180g LP =it contains one of the most universally beloved songs of all time, Hallelujah, as well as such works of distilled, meditative genius as Dance Me To The End Of Love, If It Be Your Will and The Law.

2012 EU 180g vinyl LP+bonus CD - Newest album from master singer/songwriter Leonard Cohen Here are 10 new songs that mine the heart shake the body and break the boundaries as everybody knows only Leonard can do A signature of our...