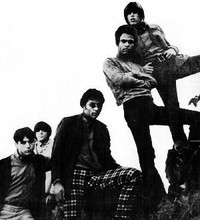 Love was an American rock group of the late 1960s and early 1970s. They were led by singer/songwriter Arthur Lee  who wrote most of the songs, although some of their best known songs were written by Bryan MacLean. One of the first racially diverse American pop bands, their music reflected different influences, combining elements of rock and roll, garage rock, folk and psychedelia.

While finding only modest success on the music charts, Love would come to be praised by critics as one of the finest and most important American rock groups of their era. Their third album Forever Changes (1967) is generally regarded as their masterpiece.

( 1967 ) 2012 EU reissue on 180g vinyl LP -Forever Changes regularly draws epic praise. Rolling Stone described it as "elegant armageddon", another rave review called it "one of the most distinctive masterpieces in that era of masterpieces".  One of the f