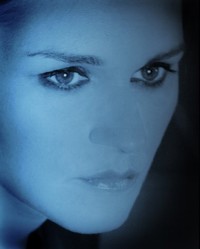 Madeleine Peyroux (1974 - ) is an American jazz singer, songwriter, and guitarist. Peyroux (French pronunciation: [madˈlɛn pɛˈʁu]) is noted for her vocal style, which has been compared to that of Billie Holiday.

“The only thing that matters is the song,” says singer-songwriter Madeleine Peyroux. That conviction along with a ‘one of a kind’ voice, has carried the Jazz artist from busking on the streets of Paris, all the way to mainstream recognition.

Madeleine Peyroux, just the name forecasts a feeling of the French, of someone who has lived life and knows how to sing about it. And, we listen to "Careless Love" and we realize we are listening to someone special who has an innate understanding of how to sing these songs. How can this be when Madeleine is in her late twenties and an American to boot? She is a special find and we intend to keep her.

Madeleine was born in Georgia, but grew up in Paris and New York. She got hooked on French culture and began to sing with street musicians. She learned her craft by listening to the greats and then singing the way she knew best. She was found in a small club in New York and was signed by a major record label.
She loves Billie Holliday, Bob Dylan, Leonard Cohen and Edith Piaf. She has a voice of her own, sometimes husky but always dreamy. Larry Klein produced this album, he is known for working with Joni Mitchell and Shawn Colvin, and once again has proved his worth.

( 2004 ) - 2015 US reissue on HQ vinyl LP-This is a beautiful record flowing with sparse arrangements and sultry vocals. If you like Norah Jones, wait until you hear this! The 12 songs found on her 2004 sophomore set Careless Love feature a mix of acoust

( 2004 ) - 2022 reissue standard vinyl LP-This is a beautiful record flowing with sparse arrangements and sultry vocals. If you like Norah Jones, wait until you hear this! The 12 songs found on her 2004 sophomore set Careless Love feature a mix of acousti