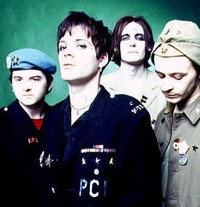 Following Edwards' disappearance, Bradfield, Moore and Wire persisted with Manic Street Preachers, and went on to gain critical and commercial success, becoming one of Britain's premier rock bands.[5] The band's later albums retained a leftist politicisation and intellectual lyrical style while adopting a broader alternative rock sound.[6] Altogether, they have garnered eleven Top 10 albums, fifteen Top 10 singles and have reached No. 1 on the UK charts three times—with their 1998 This Is My Truth Tell Me Yours album, the 1998 "If You Tolerate This Your Children Will Be Next" single and the 2000 "The Masses Against the Classes" single.