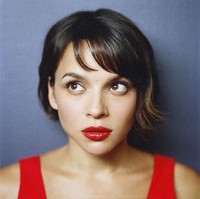 Norah Jones(1979 - ) is an American singer-songwriter, musician, and actress. She is a daughter of sitar virtuoso Ravi Shankar and Sue Jones. She is Anoushka Shankar's half-sister.

In 2002, she launched her solo music career with the release of the commercially successful and critically acclaimed album Come Away with Me, a fusion of country music and pop with elements of jazz which was certified diamond album, selling over 26 million copies.The record earned Jones five Grammy Awards, including the Album of the Year, Record of the Year, and Best New Artist. Her subsequent studio albums Feels Like Home, released in 2004; Not Too Late, released in 2007, the same year she made her film debut in My Blueberry Nights; and 2009's The Fall all gained Platinum status, selling over a million copies each and were generally well received by critics. Jones' fifth studio album, Little Broken Hearts, was released on April 27, 2012.

NORAH JONES - I Dream Of Christmas

2021 EU issue on stanadrd LP- the 9x GRAMMY winner has made her first holiday album with I Dream Of Christmas, a collection of timeless seasonal favorites ("White Christmas," "Winter Wonderland," "Christmas Time Is Here") and new originals that explore th

( 2002 ) 2022 EU 20th anni. reissue vinyl LP - debut album from the Grammy-winning singer/songwriter. The album's critical and commercial success was a breakthrough for Jones in 2002, as it reached the top of the Billboard 200 chart and several jazz char