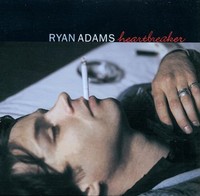 Ryan Adams:(1974- )
Highly regarded and notoriously volatile American alt-country singer/songwriter whose star rose high during the 2000s.  He started as a frontman of Whiskeytown, but garnered the most fame as a solo artist. In addition to singing, he also plays himself guitar and piano. Adams labeled the new Gram Parsons and Kurt Cobain, but his career is particularly due to the frequent composing and recording songs can best be compared to that of Neil Young. Both country-rock and folk-style throughout his career.

2017 EU issue on 180g LP +download WAV+MP3- Ryan Adams' first album of all new original material since 2014's Ryan Adams, heralded by lead single "Do You Still Love Me?", Prisoner is somehow one of the most personal yet universal works of the acclaimed si