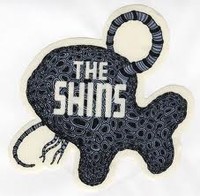 ( 2001) - 2004 vinyl LP+download EU edition, the debut studio album. The album contains the songs "Caring Is Creepy" and "New Slang," both of which appeared in the 2004 film Garden State

SHINS, THE - Wincing The Night Away

2007 vinyl LP+download EU edition,The 3rd album from one of the most understated underrated and important actuallypopular pop acts of our time who have mastered all we knew them to be before and this time thrown into the mix an even greater depth and...