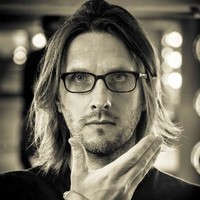 Steven Wilson (1967 ) is a British singer , guitarist , pianist and producer in the progressive rock and metal genre . He is a guitarist and lead singer of the British progressive rock band Porcupine Tree ( since 1991 ) and also a member of the band formed in 1986, No- Man , which nowadays includes the duo Wilson and Tim Bowness . Wilson also produced the Blackwater Park , Deliverance and Damnation albums of the Swedish metal band Opeth , and he wrote the last album . He also has several musical contributions to these albums . He has worked with artists such as Opeth, King Crimson, Pendulum, Jethro Tull, XTC, Yes, and Anathema.

Wilson in addition to his work with Porcupine Tree various musical side projects, including Bass Communion , IEM ( Incredible Expanding Mindfuck ) , Continuum and Blackfield . This last project he recorded three albums ( Blackfield I, II and Blackfield Welcome to my DNA ) with the Israeli musician and peace activist Aviv Geffen . Since 2009 he has also made three solo albums :

2021 EU issue on limited 180g red vinyl - Steven Wilson newest album The Future Bites' is an exploration of how the human brain has evolved in the Internet era. As well as being Wilson's phenomenal sixth album, it is also an online portal to a world of

STEVEN WILSON - -Raven That Refused To Sing (And Other Stories )

2011 EU issue on vinyl 2LP - 2011's Grace For Drowning, which Wilson describes as "my biggest project to date," is the second album released under Wilson’s own name, and builds on the artistic inroads he forged with 2009’s exceptionally well-received In

2021 EU issue on limited 180g vinyl - Steven Wilson newest album - 2021 EU issue on 180g red vinyl LP-'The Future Bites' is an exploration of how the human brain has evolved in the Internet era. As well as being Wilson's phenomenal sixth album, it is al

STEVEN WILSON - -To The Bone

2017 EU issue on 45RPM 2xLP- Steven Wilson has announced details of To The Bone – his expansive, brilliant fifth album, a gloriously dynamic modernist pop record as imagined by the UK’s biggest underground artist.