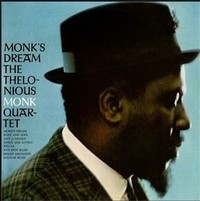 Thelonious Monk (1917 - 1982) was a US-American African-American jazz musician, who became known as a pianist and composer.
He was co-founder of Bebop alongside Charlie Parker, Dizzy Gillespie, Charlie Christian and Kenny Clarke. With his idiosyncratic piano style and his distinctive compositions Monk is considered one of the great individualists and major innovators of modern jazz.

( 1956 ) - 2014 reissue 180g vinyl=A singular and wonderfully off-kilter artist from day one, Genius Of Modern Music Volume 1 includes such classic Monk fare as "Round About Midnight," "Off Minor," "Ruby My Dear," "Thelonious" and "Well You Needn’t" among

( 1957-59 ) - 2018 EU repressing on 180g vinyl LP- compiles some obscure gems from the Riverside years. Monk’s first recording of his most famous composition, “’Round Midnight”, was privately made by Timme Rosenkrantz in November of 1944. He later record

( 1964 ) 2010 EU repressed on 180g vinyl LP = With its three compositions by Thelonious Monk, one might call this LP from 1964 ''3 Standards and 3 Monks''. The 'High Priest' of bebop had reached a further pinnacle in his career and performed with his fant