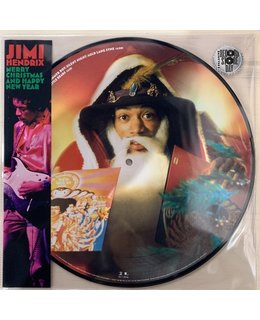 2019 reissue on picture disc vinyl LP -RSD 2019-If you're a dedicated Hendrix fan, this has to be on your Xmas wish-list!

The medley "Little Drummer Boy / Silent Night / Auld Lang Syne" is recorded in 1969 as Jimi and his Band Of Gypsys (Billy Cox and Buddy Miles) were rehearsing for their appearances at the Fillmore East in New York in 1969. Knowing that this was going to be a special occasion, Jimi readied and recorded this medley of holiday favorites to celebrate both Christmas and the dawning of a new decade.

"Three Little Bears", which was recorded with The Experience in 1968 during sessions for Electric Ladyland. It was originally released on the posthumous compilation War Heroes.