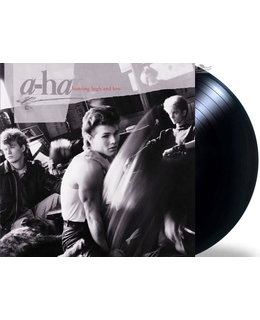 Formed in 1982 by Morten Harket, Paul Waaktaar-Savoy and Magne Furuholmen, Norwegian new wave band A-ha went on to become one of the biggest pop acts of the 1980s.

Beginning with a bang, A-ha’s 1985 debut, Hunting High And Low, sold more than eight million copies worldwide and spawned a handful of hit singles including "Take On Me," "The Sun Always Shines on TV," "Train of Thought" and "Hunting High and Low." An extremely catchy pop riff and an iconic music video helped make A-ha’s first #1 single "Take On Me" a classic and much-loved song for millions around the world. In the fall of 1986, “Take On Me” and “The Sun Always Shines on TV” were nominated for 11 MTV Video Awards combined, and A-ha won eight of these. With Hunting High and Low A-Ha had officially arrived and as one reviewer exclaimed, “It’s a record from a band that wanted everything – all at once.”
This was a huge hit one day and still a great album of simple and warm pop music. Recommended together with Scoundrel days (their next album).
Tracks:
A1.  Take On Me
A2.  Train Of Thought
A3.  Hunting High And Low
A4.  The Blue Sky
A5.  Living A Boy's Adventure Tale
B1.  The Sun Always Shines On T.V.
B2.  And You Tell Me
B3.  Love Is Reason
B4.  I Dream Myself Alive
B5. Here I Stand And Face The Rain
Anyone who dismissed a-ha as a one-hit wonder must have missed out on the band's fine debut, Hunting High and Low. Though the band spawned many further hits across the rest of the world, "Take on Me" exploded in the States and the group never cracked the top of the charts again. It's a shame, because the album contains a handful of songs that nearly match the manic energy and emotional crack of its big hit. Further, it's a cohesive album with smart pace changeups, and it rarely fails to delight or satisfy a listener's need for a synth pop fix.

The opening kick is a huge one: "Take on Me" is a new wave classic laced with rushing keyboards, made emotionally resonant thanks to Morten Harket's touching vocal delicacy. It didn't hurt in the era of MTV that the song's video was a hyperkinetic blend of mind-warping animation and filmed footage with a romantic thriller's heart. Harket's hunky physique and cheekbones also didn't hurt the video's chances at heavy rotation.
Getting past that video, "The Sun Always Shines on T.V." is just as thrilling. Starting as a sad ballad, it explodes into something much more, as chugging guitars and operatic synths keep pace with Harket's evocative vocal stylings. If ever a 1980s song qualified as Wall of Sound, "The Sun Always Shines on T.V." would be it. The remainder of the album sees a-ha switching deftly back and forth between dramatic overtures and classic new wave keyboard motifs. "Train of Thought" and "Love Is Reason" are reminiscent of early Depeche Mode or Camouflage, but Harket's rich voice and flair make them purely a-ha.
The band explores decidedly European terrain in the theatrical "Hunting High and Low" and dances a pop waltz with the sweet "Living a Boy's Adventure Tale," coming across like a marriage between the Blue Nile and Alphaville. Delightful song snippets "The Blue Sky" and "And You Tell Me" act as frosting on the cake or as glue between the theater and the dancefloor. One can't escape the feeling that Hunting High and Low is a product of the 1980s, but with highs like "Take on Me" and "The Sun Always Shines on T.V.," and no lows in sight, a-ha's debut is a treat worth relishing.
Discs: 1
Drager(LP,EP,12,7,CD): LP
Qual(120grs,150grs,180grs): 180grs
Speed(33,45): 33
Label: Rhino-Warner
Originally released: 1985
This release: 2015