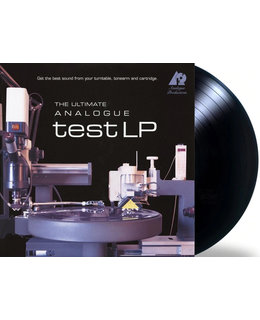 ThisTest record was pressed at Quality Record Pressings on 180 gram vinyl. "First of all I have to say it comes along in close to perfect manufacturing quality. In comparison to lots of other test records available in the market there are nearly no warps.

Please Note: This set-up tool is intended for use beyond simple audible testing. Certain tools are required to achieve intended results, including and most notably an Azimuth Range Meter like the Fozgometer

"Back in the golden age of vinyl there were many different test LPs available - all rather similar to one another. Analogue Productions decided to create a modern test disc that hasn't been done before, and have succeeded. It specifically addresses the turntable, cartridge and stylus." - John Sunier, Audiophile Audition, February 21, 2010

"The disc is indispensable for anyone who is dedicated to the most accurate adjustment of his LP playback system and thus the best sound." - Harry Pearson, The Absolute Sound Editor

"…The modern renaissance in vinyl over the past decade, coupled with the startlingly high performance of today's best LP front ends, has created the need for a new standard in test records. And that new standard is undoubtedly The Ultimate Analogue Test LP from Analogue Productions. This new disc has been meticulously assembled in collaboration with some of the world's greatest technical experts in record cutting…a 'must-have' for any analog enthusiast." – Robert Harley, The Absolute Sound, October 2008

"The speed stability of this test record is outstanding and below the measurable threshold, that's what it's supposed to be. With most test LPs, the speed is erratic caused by off center holes and warps in vinyl. I have over 40 test records and for most functions they are useless. You made a great test LP, I used it to set up and measure my new Rim Drive and without it most of the testing would have been useless. It's unbelievable, there is no wavering." – Harry Weisfeld, VPI Industries

"The Ultimate Analogue Test LP from Analogue Productions is something that could only have been dreamed of a few years ago. Now it's a reality and an indispensable tool for setting up and getting the most from your vinyl rig. It's 'all about the music' for us vinyl lovers and I can't imagine how we ever did without something like this for so long! Bravo to Analogue Productions/Acoustic Sounds for making this the true Ultimate set-up disk, a tool that will enable us to get the most music and good sound from our record collections." – Steve Hoffman, mastering engineer

"The Ultimate Analogue Test LP is a milestone and very powerful reference for those truly concerned about getting the very best performance from an analog (vinyl) front end and also for those professionals who manufacture the related analog front end products. To start with, Track One very accurately provides a 1kHz tone at 7 cm/s mono (in-phase, lateral) NAB OVU standard reference level, which has been the industry standard since 1964. This supercedes the long-outdated RCA 5 cm/s (3.54 cm/s stereo) test level. Track One can also be used as an outside track wow and flutter reference as will the inner Track 10…two ways to approach this measurement. A close look shows that each track on this disc can be used in multiple ways far beyond the list provided in the limited space on the record jacket. Hats off to all of those involved in making this outstanding test LP." – Keith Herron, Herron Audio

"First of all I have to say it comes along in close to perfect manufacturing quality. In comparison to lots of other test records available in the market there are nearly no warps. So when it comes to talk about a test record, the first thing that is absolutely necessary is perfect flatness of the disc. The second and third tracks on the first side of this record are very good tools to adjust azimuth to a certain degree without test-equipment. Track 10 is a perfect 3150 Hz tone that is mastered close to perfection. In direct comparison to a German-made product, one can see that level is kept in a much narrower band. So there is only very small amplitude deviation visible. All of the other tracks are very useful as well. I have to give my highest recommendation to this record – a must have for any audiophile!" – Dr. Christian Feickert, Feickert Analog Products

"In having created a special grinding system we at Basis have created turntable drive belts precise to within a fraction of a Micron. Combined with our similarly groundbreaking work in creating absolutely true bearings and platters Basis has broken new ground in turntable speed stability. The result is that the speed stability of Basis turntables now exceeds the limits of the very test records used to test speed stability. Only one out-of-print test record so far had been up to the task. The recent test record you sent makes the second. The lack of drift in the test tone makes this the most close to perfect speed check we have found to date. Thank you for bringing this record to my attention." – A.J. Conti, Basis Audio

"Yes, I'll occasionally set up a cartridge visually to listen casually. However, all serious listening is done by setting up with the 'Ultimate Test LP,' it's always interesting to see how far off I am with a visual set up. Some of the adjustments are very fine. I don't think one can be certain that their cartridge is set up right without this disk." – Michael Yee, Michael Yee Audio
Analogue Productions set out to produce the ultimate test record.
We’ve consulted many experts in the field, including mastering engineers, audio experts, turntable experts and audiophile listeners, to create a test record that's never been made before. When Barry Wolifson from Sterling Sound in New York City called us with the same idea we had been thinking about – that being to create the ultimate test record – he and our audio expert Clark Williams began to brainstorm and research ideas until they were both completely satisfied with what should go on the record.

Most of the test records in the past have been made to test a variety of equipment. This test record excludes silly cannon shots, typewriters, voices on one channel and other useless fluff. This one specifically addresses your turntable and cartridge. It’s designed to provide the basic test signals necessary to calibrate a turntable or cutting lathe as simply as possible. Most of the signals have specific implications, but it is certainly possible to use them in any number of novel ways.

This record was pressed at Quality Record Pressings on 180 gram vinyl.

Side 1
General Reference Level
This 1 kHz reference tone will allow you to establish a “base level” for all measurements.
Track 1 1Khz reference tone 7cm/s Mono, in phase (Lateral)
Basic reference for all measurements, adjust meter for maximum convenience (in the studio 0VU).
Adjust preamp channel balance for equal output.
Also used to check the offset angle of the photo cartridge; L&R signals should be exactly in phase as displayed on an oscilloscope.

High Frequency Adjustment
Tracks 4, 5 and 6 are used to calibrate the RIAA high frequency equalizer of a phono preamp. This will be used to calibrate a mastering lathe’s phono preamplifier or any phono preamplifier that has these adjustments.
Track 4 1 kHz tone at -20 below reference level, Lateral
Reference for High Frequency test.
Track 5 10 kHz reference tone at -20dbu, Lateral
Adjust the high frequency until the output level equals that of Track 4.
Track 6 1 kHz to 20 kHz sweep at -20dbu, Mono (Lateral)
The AC millivoltmeter reading should stay constant across all frequencies. There are a number of factors which can affect frequency response, including cable capacitance, cartridge loading, tracking force and worn parts. Because of this, it can be difficult to achieve perfectly flat frequency response. Sometimes by making small compromises in the 10 kHz adjustment, a better overall frequency response can be achieved.

Low Frequency Adjustment
Tracks 7 & 8 are used to calibrate the RIAA low frequency equalizer of a phono preamp.
Track 7 1 kHz to 20 Hz sweep at 0 VU (Lateral)
Play Track 7 and measure the output with your AC millivolt meter.
Ideally, the output will be flat across all frequencies. When viewed on an oscilloscope, the amplitude would remain constant during the frequency downsweep.
Track 8 100 Hz reference tone at 0 vu (Lateral)
Adjust LF Eq to reference (which is your reading from Track 1).

Track 10 Standard Wow & Flutter test signal; 3150Hz
The Wow & Flutter meter will give dynamic speed variations as a percentage deviation from nominal.
Also, the frequency counter should read exactly 3150 Hz for nominal speed. You can use the Hz function on your multi-meter (if so equipped) to verify speed here as well. You can also use to find the measurements at 45RPM. The correct reading at 45RPM would be 4253 Hz (45/33.33) x 3150.

Side 2
Track 1 Anti-skating test; 315Hz amplitude sweep to +12dbu (Lateral)
Signal should remain clean in both channels up to the highest level, both audibly and as viewed on an oscilloscope. In case of distortion, increase anti-skating force or decrease anti-skate until breakup occurs equally in both channels. The left channel information is inscribed on the inner groove wall, the right channel information, on the outer groove wall. Because of the offset angle of a pivoted tonearm, a constantly varying vector force biases the arm towards the center of the record causing the stylus to lose contact with the outer (i.e. right channel) groove wall. Both linear and modulated groove velocity, tracking force, stylus profile, and vinyl composition are contributing factors. The anti skating force attempts to ameliorate this by applying an opposing similar force.
It is also accepted that the overall force vector increases as the tonearm approaches closer to the spindle or end of the record.

Track 2 Pink noise lateral
Track 3 Pink noise vertical
Used for cartridge “demagnetizing”
You can also use this track to loosen up the cantilever’s suspension to help break in a new cartridge. Play these tracks five to ten times after every 300 hours of normal LP playback.

Track 4 1kHz @ reference level, vertical
This out-of-phase signal should cancel to nothing when summed to mono.
Any signals still present are distortion artifacts, lack of channel balance, or timing (phase) anomalies. This test can be a second confirmation of anti-skate adjustment.

Track 5 1kHz to 10Hz sweep @ -20 below
reference level, vertical
Resonance anomalies in the tonearm / cartridge interface will show up as amplitude peaks and dips as the frequency sweeps down.
Once again, by listening in ‘Mono’ it is easier to hear the distortion artifacts.

Track 6 Silent groove for bearing rumble and table isolation
During playback of this track, nothing should be transmitted from the turntable to the speakers. Replay the track and gently tap on the rack or base that the turntable is resting on. There should be little or no thump transferred to the speakers. This track will help you experiment with turntable isolation methods and products to be able to get the most out of your playback system. You may want to use a closed or sealed headphone for best listening results, or a stethoscope on the plinth.
No specifications found
Quality Record Pressing (0)