Nederlands
Home It All Starts with One = 2021 repressing = 2LP 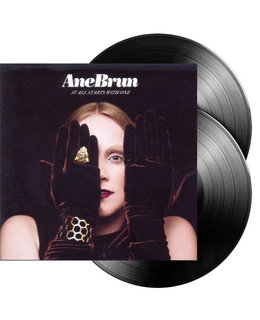 ---
Ane Brun is from Norway but is pretty much an honourary Swede having lived in Stockholm for the past decade. Her fourth album It All Starts With One could well be a major breakthrough for her coming as it does on the back of tours with the likes of Peter Gabriel and Ani DiFranco. Brun’s sound has developed from her original folk and blues influences with more orchestration present and on the single Do You Remember a frantic burst of tribal percussion. Yet it remains Brun’s voice that’s the focus a marvellously clear sometimes tremulous instrument capable of transmitting so much emotion with a single syllable. This is a blissfully gorgeous album – one that showcases Ane Brun as being at the forefront of the new wave of Scandinavian pop music.

Ane Brun:
Ane Brun (IPA æn? brun), real name Ane Brunvoll (born 10 March 1976), is a Norwegian singer/songwriter, born and raised in Molde, Norway. She lives in Stockholm, Sweden. After a few years of numerous live stints in Sweden and Norway and several non-official EP releases Ane Brun gained her own fan-base and her first official album - Spending Time With Morgan was released at the end of May, 2003 in Scandinavia, and in various European countries in the fall of 2003.