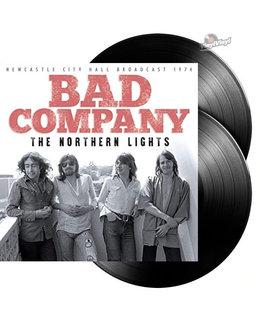 2019 EU issue on vinyl 2LP-Dating back to 1974, these radio broadcast live recorings of an ultra solid Bad Company show in Newcastle are now available on DOUBLE-LP! Limited edition!

EARLY LIVE SHOW FROM A NEWLY FORMED BAD COMPANY Formed in London in 1973 by ex- Free members Paul Rodgers and Simon Kirke, along with Mott the Hoople guitarist Mick Ralphs and King Crimson bassist Boz Burrell, Bad Company were an enormous success throughout the 1970s. Their first three albums, Bad Company (1974), Straight Shooter (1975), and Run With the Pack (1976), reached the top five in the album charts in both the UK and US, while many of their singles, such as Bad Company , Can't Get Enough , Good Lovin' Gone Bad , Feel Like Makin' Love , Ready for Love , Shooting Star , and Rock 'n' Roll Fantasy remain staples of classic rock radio. Following the recording of Bad Co s debut record, but prior to its release, the band went on a short tour of the UK, and on 9th March 74 they performed at Newcastle City Hall. The show was recorded and broadcast live on BBC Radio 1, and the full set they played that night is now available here on CD for the first time. Featuring six cuts later to be released on the Bad Company album, plus a couple of tracks that didn t make the final cut and were used as B Sides, or left unearthed for many years, plus a sterling version of the Free classic Stealer , this early live show now reveals just how fully formed Bad Company were even before they d put out any releases.
Discs: 2
Drager(LP,EP,12,7,CD): LP
Qual(120grs,150grs,180grs): standard
Speed(33,45): 33rpm
This release: 2019