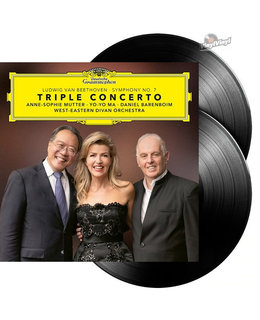 2020 EU issue 180g vinyl 2LP - Anne-Sophie Mutter, Yo-Yo Ma and Daniel Barenboim's new album, Beethoven: Triple Concerto And Symphony No. 7, celebrates a triple anniversary – the 250th anniversary of Beethoven's birth, the 20th birthday of the West-Eastern Divan Orchestra, and it will be released 40 years after the legendary Triple Concerto recording made by Anne-Sophie Mutter and Yo-Yo Ma under Herbert von Karajan.

Beethoven's Triple Concerto, for violin, cello, piano and orchestra, features three of today's most renowned classical artists and Beethoven interpreters – Anne-Sophie Mutter, Yo-Yo Ma and Daniel Barenboim. The Triple Concerto is the only concerto Beethoven composed for more than one solo instrument and the clearly delineated solo parts give the work a chamber-music feel. Beethoven composed his Triple Concerto while he was also working on the Eroica Symphony, the Waldstein and Appassionata piano sonatas and his opera Fidelio.

Beethoven: Triple Concerto And Symphony No. 7 was recorded at concerts held in Buenos Aires and Berlin – in July and October 2019 respectively – to mark the West-Eastern Divan's 20th birthday. The orchestra, co-founded by Daniel Barenboim in 1999, now stands as a symbol of multicultural understanding, and is positive proof that working together for a shared goal can break down barriers and lead to reconciliation.

Barenboim considers Beethoven, a confirmed humanist, to have been probably the first truly unconventional composer and noted, "He couldn't care less about what people thought." He also underlines the real physicality and dedication Beethoven demands from his players, "He forces you to go to the edge, to the precipice and then the abyss. That takes a tremendous amount of courage."

Beethoven's music, with its existential profundity and ability to speak to all of humanity, remains as timelessly compelling and universally relevant as the day it was written. As Anne-Sophie Mutter observes, he understood how important it was for all of us to stand up for our fellow men, "The idea that we should live in a brother- and sisterhood is, for me, his major achievement...That's what makes him a messenger from the past pointing the way to a better future."

Both works recorded for the album reflect that life-affirming message. Beethoven considered his Seventh Symphony one of his best works. The symphony is famous for its joyful, dance-like character and was described by Wagner as "the apotheosis of the dance." The Triple Concerto also has a special place in Beethoven's output, revealing both his sense of humor and his revolutionary spirit. Yo-Yo Ma noted, "The constant invention is so surprising, and it's so celebratory, so positive. The second movement is noble and open, but the first and last movements are just joyous!"