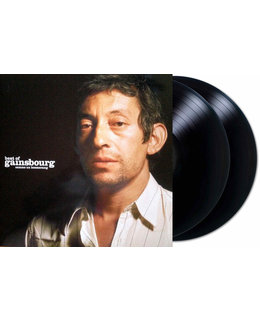 2011 EU issue 180g vinyl 2LP-Serge Gainsbourg may primarily have been known outside his native land for the heavy breathing masterpiece ‘Je T’aime (Moi Non Plus)’, the only French song ever to top the British charts, but to those at home he stood a...

2011 EU pressing 180g vinyl 2LP-Serge Gainsbourg may primarily have been known outside his native land for the heavy breathing masterpiece ‘Je T’aime (Moi Non Plus)’, the only French song ever to top the British charts, but to those at home he stood as one of the more potent cultural figures of post-war France. Discover why he is held in such high regard with this 180g Vinyl set.

The common difficulty of separating art from artist is especially acute where Serge Gainsbourg is concerned. Especially outside France, he endures largely as an untrumpable cliché of sybaritic French masculinity, far better known for leering at Whitney Houston on a chat show than he is for a vast and important canon of popular song (Gainsbourg himself, it can fairly be understated, rarely sought to downplay his image as an unregenerate boulevardier).
This 47-track retrospective, appearing 20 years after his death, aged 62, persuasively argues that the occlusion of Gainsbourg’s music by Gainsbourg’s personality is a minor outrage. There is a great deal of stunning pop here, clustered on the first of the two discs. Gainsbourg’s swaggering 1960s hits, including Docteur Jekyll et Monsieur Hyde and Qui Est "In" Qui Est "Out", were an under-remarked but significant influence on mid-90s Britpop, especially Pulp, Saint Etienne and Blur at their more stately.
The later songs collected on the second disc are more erratic, but nevertheless compelling. When Gainsbourg embraced self-parody, he did so with characteristic ardour, as on the porn soundtrack sound-alike Sea, Sex and Sun. When he drifted into outright lunacy, he displayed comparable bravado. Among the treasures here is the title-track from his 1975 release Rock Around the Bunker, a deeply peculiar concept album about Nazism on which Gainsbourg concocted camp absurdism from his childhood memories of being Jewish in occupied France.
There is another conventional wisdom about Gainsbourg – that his voice wasn’t up to much, that his greatest moments were those involving his various female muses (Dieu Fumeur De Havanes, with Catherine Deneuve, and his infamous duets with Jane Birkin, are included here). This is also unfair: like his kindred spirits Leonard Cohen and Lee Hazlewood, Gainsbourg found ample room within his limitations, that languid growl secreting deceptive quantities of wit, and even warmth.