Nederlands
Home When We All Fall Asleep, Where Do We Go? 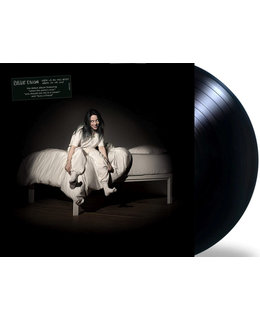 2019 EU issue on 180g vinyl LP-including, "Wish You Were Gay", "Bad Guy", and "All the Good Girls Go to Hell". The hugely anticipated debut full length album from Billie Eilish, When We All Fall Asleep, Where Do We Go? was praised by music critics for its

2019 EU issue on 180g vinyl LP- The hugely anticipated debut full length album from Billie Eilish, following on from her excellent 2017 EP Don't Smile At Me.

When We All Fall Asleep, Where Do We Go? was praised by music critics for its subject matter, songwriting, cohesion and Eilish's vocal delivery. It was also a commercial success, topping charts in numerous countries including in the United States, Canada and the United Kingdom. Two singles, "You Should See Me in a Crown" and "When the Party's Over", were released prior to the album's announcement, while its third single, "Bury a Friend", accompanied the record's pre-order and was met with critical acclaim. These were followed by three more singles, "Wish You Were Gay", "Bad Guy", and "All the Good Girls Go to Hell".

The acclaimed singer has already done some monumental things and at the age of 17, she wrote, produced and recorded this entire album with her brother Finneas in their childhood home in LA. We can't wait to hear this set of groundbreaking songs.
Billie Eilish’s meteoric rise to global stardom has been nothing short of phenomenal and arguably unparalleled to date. Since her ‘ocean eyes’ debut, Billie has quietly, yet unapologetically infiltrated the forefront of pop. Thanks to a growing legion of loyal followers across the globe, an EP that has sat in the Billboard Top 200 for more than 18 months now, on the cusp of going Gold in the UK and more than 5 billion combined streams globally, her tours have sold out consecutively around the world.

Billie Eilish Happier Than Ever = 2LP =

Lykke Li So Sad So Sexy