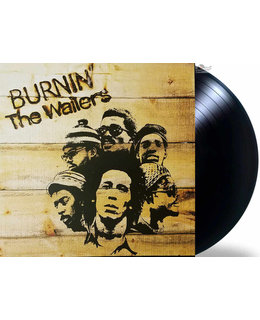 2015 EU reissue on 180g vinyl LP+ download - The sixth studio album by Jamaican reggae band The Wailersincluding " I Shot The Sheriff," "Get Up Stand Up, " "Small Axe " & "Duppy Conqueror ". Released in the same year as the bands debut Catch A Fire was released, his ultimate work. Brilliantly orchestrated and emotionally evocative, Marley created a timeless work that appeals aesthetically and philosophically

Tracks:
A1 Get Up Stand Up
A2 Hallelujah Time
A3 I Shot the Sheriff
A4 Burnin and Lootin
A5 Put It On

The Wailers fourth album overall Burnin was their second for Island Records released only six months after its predecessor Catch a Fire. Given that speed, its not surprising that several tracks Put It On Small Axe and Duppy Conqueror are rerecordings of songs dating back a few years. But they fit in seamlessly with the newer material, matching its religious militancy and anthemic style.