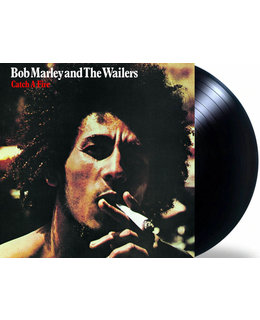 2015 EU reissue on audiophile 180g LP +MP3=with hits ‘Stir It Up’, 'Kinky Reggae,’‘Slave Driver’ and ‘400 Years’, among others.
Catch A Fire (1973) Not only album signal reggae's international breakthrough and the emergence of its patron saint, but it remains one of the genres finest. An album with a groove that was languid, soulful and sun-drenched, yet lean and taut as a coiled spring.  Catch A Fire was the fifth album by the group known and billed simply as the Wailers who had been playing and recording together in Jamaica for a decade or more before it was released.

An album of revolutionary genius, which combined perfect timing with lasting cultural significance, Catch A Fire laid a foundation stone for the career of the world’s first and indeed only reggae superstar and established a bridgehead between the deep roots music of Jamaica and the commercial pop mainstream of the First World. Its release marked the moment that reggae truly did begin to “catch fire” on the international stage.