Nederlands
Home The Bravest Man In The Universe 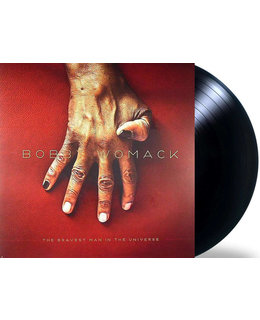 Label:  XL recording
Availability:   In Stock
Delivery time:
€22,95 Incl. VAT (BTW)
Release date: 07-06-2012
2012 EU issue on standard LP+bonus CD-Womack's First LP of Original Material Since 1994 Co-Produced by Blur/Gorillaz Leader Damon Albarn
Soul Legend's Voice, Passion Unrelenting on Noteworthy Set
The Bravest Man In The Universe is Bobby Womack’s first album of original material since 1994’s Resurrection. Co-produced by Damon Albarn (Gorillaz, Blur) and Richard Russell, the album was recorded at Albarn’s ‘Studio 13’ in West London and New York’s Manhattan Center between October and December of 2011. The 10-song album features guest vocalist Lana Del Rey on the song, “Dayglo Reflection.”
Womack’s musical career has spanned 50+ years during which time he has written songs recorded by the Rolling Stones, Wilson Pickett and Janis Joplin (to name a few) and has played on sessions for Pickett, Aretha Franklin, Ray Charles, Dusty Springfield and more.
Nicknamed “The Preacher” and “The Poet,” Womack has topped the singles charts many times over and his collaborations with artists from Patti Labelle to Mos Def to Gorillaz to the Rolling Stones showcase a legend who has and continues to influence musicians across genres. Womack was inducted into the Rock and Roll Hall of Fame in 2009. LP includes MP3 coupon.
"In a seemingly solitary state, the Cleveland native reflects and pontificates as if on his knees before his master. Deeper in register than during his heyday, his huskily velvet timbre still lends to falsetto cries, closed-eyes concentration, and hunched-over postures tied to his church roots."
-Bob Gendron, TONE Audio, Issue 46
Tracks:
LP
A1 The Bravest Man In The Universe
A2 Please Forgive My Heart
A3 Deep River
A4 Dayglo Reflection
A5 Whatever Happened To The Times
B1 Stupid Introlude
B2 Stupid
B3 If There Wasn't Something There
B4 Love Is Gonna Lift You Up
B5 Nothin' Can Save Ya
B6 Jubilee (Don't Let Nobody Turn You Around)
Discs: 1
Drager(LP,EP,12,7,CD): LP
Qual(120grs,150grs,180grs): standard
Speed(33,45): 33rpm
Label: XL recording
This release: 2012