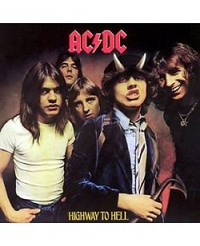 AC/DC is an Australian hard rock band from Sydney, formed in 1973 by brothers Angus and Malcolm Young. Although the band is often seen as a pioneer of hard rock, the members themselves always classified their music as rock 'n' roll.

( 1979 ) - 2009 EU reissue on 180g LP - Absolutely Incredible Sonics! A Guitar-Driven Landmark! Highway to Hell distills all the virtues of AC/DC's signature minimalism — loud, simple, pounding riffs, and grooving backbeats — into the tightest batch of so

(1990)-2003 EU issue on standard vinyl LP -with "Thunderstruck" as the lead single Arguably the Australian headbangers' strongest album in over half a decade, The Razor's Edge is quintessential AC/DC — rowdy, abrasive, unapologetically fun metal full of b

( 1978 ) 2009 EU reissue on 180g LP-Merited for its song variety, artistic expression and sonic clarity, Powerage is favored by many aficionados to be AC/DC's most accomplished performance in a studio setting. Recorded in Australia circa 1978, Powerage al

2009 EU reissue on 180g LP-(from 1975)A fine album with some nice treats for diehards, featuring the immortal 'Big Balls' The album's greatest artistic moment, however, comes in the form of 'Ride On,' with a slow, rhythmic blues ballad.

AC/DC - For Those About To Rock (We Salute You)

(1981)-2009 EU reissue on 180g vinyl LP-AC/DC's hot streak began to draw to a close with For Those About to Rock We Salute You. While Back in Black was infused with the energy and spirit of paying tribute to Bon Scott, it became...

AC/DC - Back In Black

2019 EU reissue on stanadard LP -live recording compilation with best hits. including "Let There Be Rock", "Hells Bells" ,"TNT" ","Highway to Hell" "Ride On" "Whole Lotta Rosie" "Back in Black"

2020 EU 180g vinyl LP = POWER UP is the long-awaited album from AC/DC, and the band’s 17th studio album. For POWER UP, the band reunited with producer Brendan O’Brien who helmed the double-platinum Black Ice in 2008 and the gold Rock Or Bust in 2014. AC/D

(1978 ) 2009 EU reissue on 180gLP-If You Want Blood contains many of AC/DC's best compositions up until that point: 'Bad Boy Boogie' (complete with the break-down section in which Young would 'strip'), 'The Jack,' 'Problem Child,' 'Whole Lotta Rosie,' 'Hi