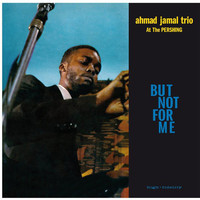 Ahmad Jamal is an innovative and influential American jazz pianist, composer and mentor. According to Stanley Crouch, Jamal ranks as the second most important one in the development of jazz after 1945 after Charlie Parker. Over the past five decades, he has been in jazz. One of the most successful trio leaders.

Since 1980, Jamal guest house to the main clubs in the United States and major European jazz festivals. He is often accompanied by bassist James Cammack and drummer Idris Muhammad. He often performs with saxophonist George Coleman.

( 1958 ) - 2012 EU pressing on 180gr LP= The release in 1958 recorded by the Ahmad Jamal Trio proved to be a turning point in Jamals career. His liberal use of silence influenced many jazz musicians, including Miles Davis. Almost overnight the trio was i