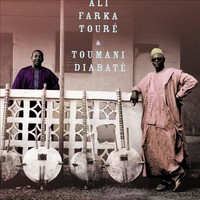 Ali Farka Toure=(1939-2006) was a Malian singer and guitarist. He is considered one of the most influential African musicians. His music is a cross between traditional Malian music and North American and British blues.

2012 EU issue 2xLP 180g vinyl =In the Heart of the Moon is a summit meeting between two world music giants guitarist Ali Farka Toure and master of the korathe 21string gourd harptoumani Diabate It is the first newly recorded work...

( 2006) 2019 EU remaster on 180g vinyl 2LP=Savane is the final solo album by Malian musician Ali Farka Touré. featuring Touré and Toumani Diabaté. It was released to high critical acclaim, earning a 94 on Metacritic. The album was also included in the bo